History of the parish 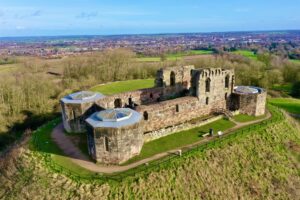 The Parish of Berkswich lies in the County of Stafford and in the Hundred of Cuttlestone.  Two great Kings introduced the formation of Shires in England: Alfred the Great (845 to 899 AD) and/or his grandson Athelstan (895 to 939 AD).  Hard facts are difficult to come by.  What we do know is that both Kings were administrators and realised the benefit of organising the land into distinct areas for better control and management. Shires were based upon main towns, but we have our Shire based upon Stafford and not Tamworth, which is unusual as Tamworth had been a major town in Mercia since King Offa (ruled 757 to 797 AD).

Within the Shire, groups of households were brought together to form Hundreds with a hundredman in charge. In Staffordshire there were five hundreds, Pirehill, Totmonslow, Offlow, Seisdon and Cuttlestone. There were 71 towns listed in Cuttlestone Hundred, including Walton.

The Anglo-Saxon Chronicle records that in 1086 King William I, whilst at Gloucester, sent out men to find out what or how much each landowner held and what it was worth. He was particularly thorough, sending out a second set of commissioners to check on the reliability of the first.  The results were brought together at Winchester, corrected, abridged and published. It became known as the Domesday Book and showed the King what he owned and who held it on his behalf. In addition, and as a result, every man now knew his rights.

The Staffordshire record shows that Epi de Cestre (the Bishop of Chester) held land in the Lordship Bercheswic.  What is more, the Bishop had held this land before 1066.  Berkswich comprised a church, 5 hides (about 600 acres of arable land), land for 4 ploughs (which would on average include 32 oxen), 2 villagers (they also held valuable land) and a priest.

Walton on the Hill (Waletone) was a part of that Lordship and had 4 smallholders (holders of poor-quality land) with 2 ploughs. There was a 4-acre meadow and woodland measuring 1½ leagues long by 1 league wide (about 2 miles by 1½ miles).  Brocton and Bednall also belonged to the Lordship but were recorded as waste.

The Church retained ownership until 1546 when it was surrendered to King Henry VIII, who in the same year granted the land to Sir William Paget.  From then on the land bounced between members of the Marques of Anglesey family until 1893, when 1,784 acres were conveyed to Lord Lichfield.

The Local Government Act 1894 reformed local government and introduced elected councils at District and Parish level.  The first parish elections took place in April, 1896.  The number of councillors would vary between 5 and 15, depending upon population and the decision of the parish council.

In 1808 a serious proposal was made to demolish Holy Trinity Church, Baswich as it was said, the church needed very expensive maintenance and repairs. Sites at Brocton and Walton on the Hill were considered and eventually, the site at Walton on the Hill got the go ahead. The land for the building was donated by the Earl of Lichfield. The building itself was designed by Thomas Trubshaw and costed at £753, not including the spire and tower.  The additional work was costed at £204.  The finance was provided by Rev. Richard Levett, his wife and Thomas Salt.  The church was finished and dedicated to St Thomas the Apostle as a chapel of ease in 1842.  Holy Trinity was not demolished.

St Thomas’ Church did not have an easy beginning. In 1845 the spire was struck by lightning and part of it destroyed. Windows and part of the roof were damaged.  Repairs were completed in 1887 but by 1903, it was considered unsafe.  The lead roof was replaced with a lighter one and the heavy weathercock was removed and a less weighty one put in its place.

There are a number of interesting buildings in the parish and eight listed buildings. The first is 14, The Village, Walton on the Hill, a 17th century building partly timber-framed and brick infill with tiled roof. Inside are exposed timber framing and 2 bressumer fireplaces.

Milford Hall is an 18th century large Georgian style house, which was the seat of Richard Bird Levett Esq.

Milford Bridge is a late 18th century structure designed by James Brindley and crosses the Staffordshire and Worcestershire canal.

Walton Bridge is considered to be early to mid 19th century and crosses the Staffordshire and Worcester canal.

The Holdiford Bridge is thought to be late 18th. Century and carries the Holdiford Road over the river Sow.

Stafford Lodges, Shugborough Park were designed by Samuel Wyatt and are undated. At the turn of the 18th Century, Wyatt remodelled and extended Shugborough Hall for Viscount Anson.

Today, the Parish Council comprises 10 elected councillors, supported by a salaried Clerk, who advises on the law and helps manage finances. Elections take place every 4 years and each year the Council elects a Chair and Vice Chair.

The Parish Council produced a Walton Village Trail Leaflet in 2017 which contains further information on the history of Walton on the Hill.